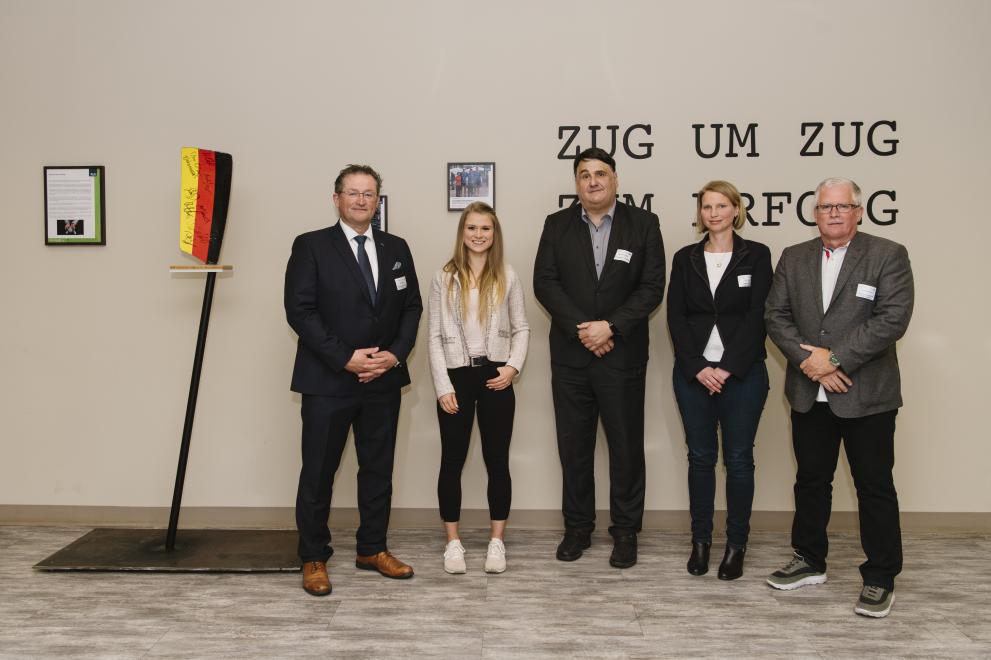 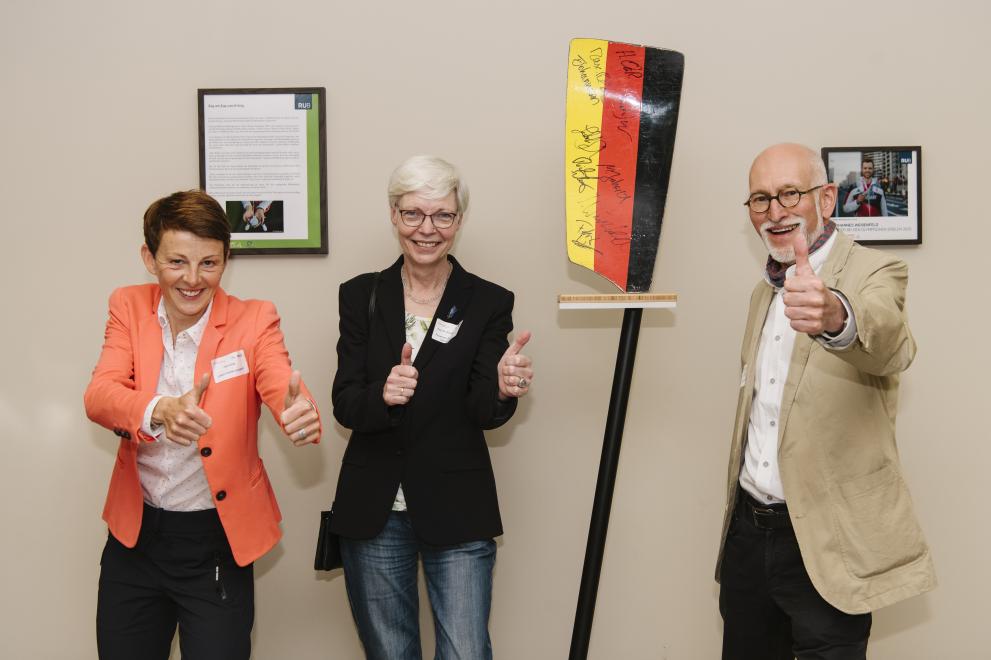 The oar with the original signatures of the German eight 2017 - 2021 is a personal gift from Johannes Weißenfeld (medical student and silver medallist from Tokyo; missing in the picture) to his sponsor, former rector Prof. Dr. Elmar Weiler. Head of University Sports Ines Lenze was delighted to receive this as a permanent loan from Prof. Weiler during the signing ceremony, and Prorector Prof. Dr. Kornelia Freitag was also thrilled by the history of the rowing blade.
Mareen Meyer
Spitzensport Unterzeichnung Vertrag 3 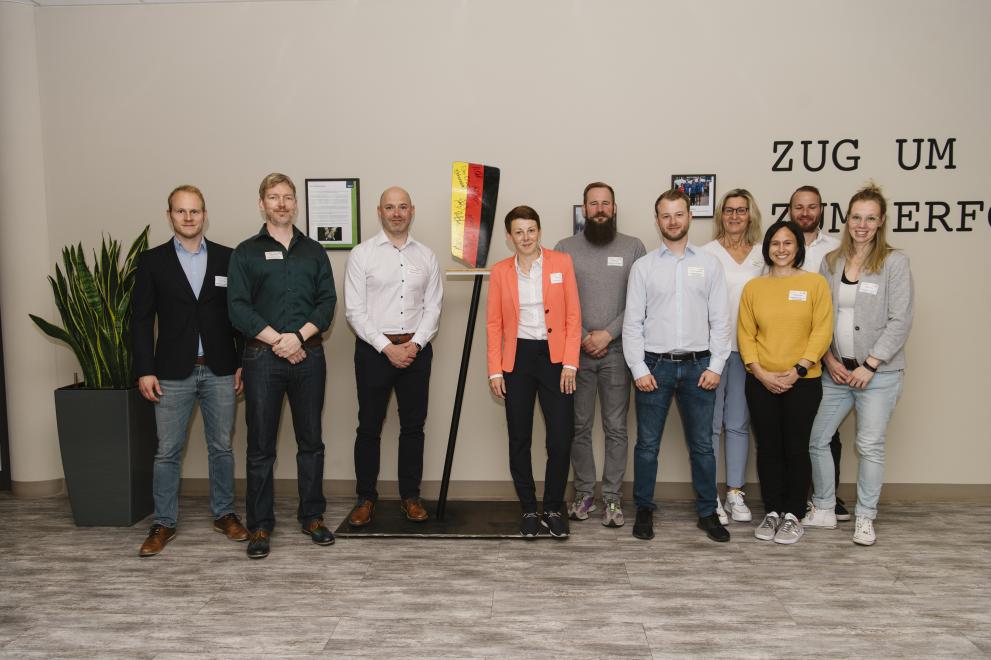 The university sports team has been responsible for implementing the cooperation agreement since 2012. Daniel Krüger (left) is the first point of contact for this together with Ines Lenze (4th from left). Stefan Bertling, Christian Sendes, Chris Winter, Christian Kranenberg, Birgit Otting, Nicola Weinzettl, Marian Kellermann and Kristin Pieper are happy about the signing.
Mareen Meyer
Spitzensport Unterzeichnung Vertrag 4 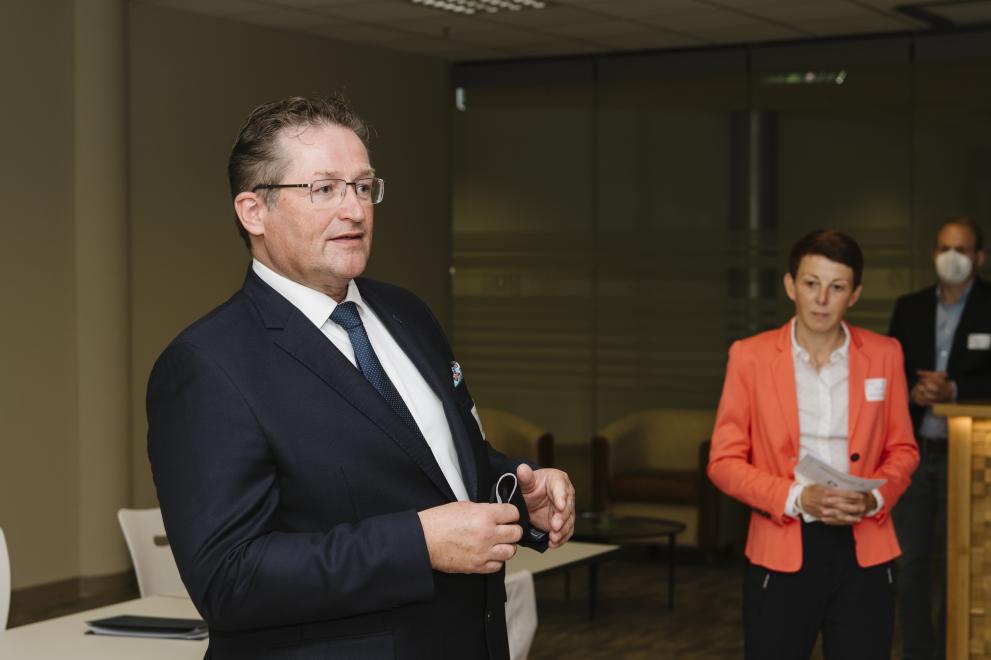 In his impulse, the adh board chairman Jörg Förster underlined the important role of universities in the promotion of top-class sport and thanked the RUB for its positive work in this important field of action.
Mareen Meyer
/

The RUB has reaffirmed its will to be a "partner university of top-class sport" and to offer top athletes studying a dual career. On 30 May 2022, all participating institutions signed an updated cooperation agreement at Unifit.

The RUB has been a "partner university of top-class sport" since 2003. The corresponding project had been initiated four years earlier by the German University Sports Association (adh). In the cooperation agreement, the RUB and its partners committed themselves to working specifically to ensure that students can pursue dual careers consisting of academic and top-level sport. The partners of the RUB and university sports are the adh, the Olympiastützpunkt NRW/Westphalia and the Akafö.

So far, the RUB has specifically supported athletes who are members of a national squad in an Olympic sport. Since 2003, the support services have included

With the new agreement, the possibility of applying for a top-level sports scholarship was also anchored. In addition, the target group was expanded to include Nachwuchskader 2 athletes as well as 1st and 2nd league players of Olympic team sports, who can thus also take advantage of the support services.

Since 2012, the Bochum University Sports Centre has been in charge of coordinating and implementing the agreement. The steadily growing number of student athletes and their successes show that the agreement is working and that RUB is making a significant social contribution to the promotion of top-level sport. "It is very important to us to support the top-class athletes at RUB in reconciling their studies and competitive sport", says Daniel Krüger, who is the head of competitive and top-class sport at the university sports.

The signing was also done with the aim of making RUB even more attractive for potential participants in the "Rhine-Ruhr FISU World University Games 2025". The Olympic Games for students will take place in Bochum, Duisburg, Düsseldorf, Essen and Mülheim an der Ruhr in 2025.

Head of University Sports Ines Lenze was very pleased: "I am sure that today's signing will give a further positive boost to the promotion of top-class sports at RUB. Specifically, like our contractual partners, we are also looking towards the World University Games 2025 and would like to make our contribution so that RUB students can qualify for this important top sporting event on our doorstep."

Linn Kleine also emphasised that the World University Games 2025 already play a major role for top student athletes: "I was expecting to be nominated for the World University Games in Chengdu in China this year, when these games were postponed to 2023. That got me down for a few days because I had already invested so much. The idea of having the opportunity to compete for Germany on my doorstep in 2025 is extremely motivating and I know that I can also count on the support of RUB on my way!"